Here in Minnesota, where choral music traditions are mythic, we are blessed with an abundance of Christmas concert performances. And one of those cherished traditions is Christmas in Christ Chapel at Gustavus Adolphus College.

The Joy of Sharing

As it turns out, Heroic Production founder and CEO Jon Young is a Gustavus grad, as is his wife Anita, Heroic’s CFO. Anita majored in piano and business, and – as a freshman, sang in the first-ever Christmas in Christ Chapel concert. “There was a raging blizzard,” she recalls, but the chapel was packed anyway. 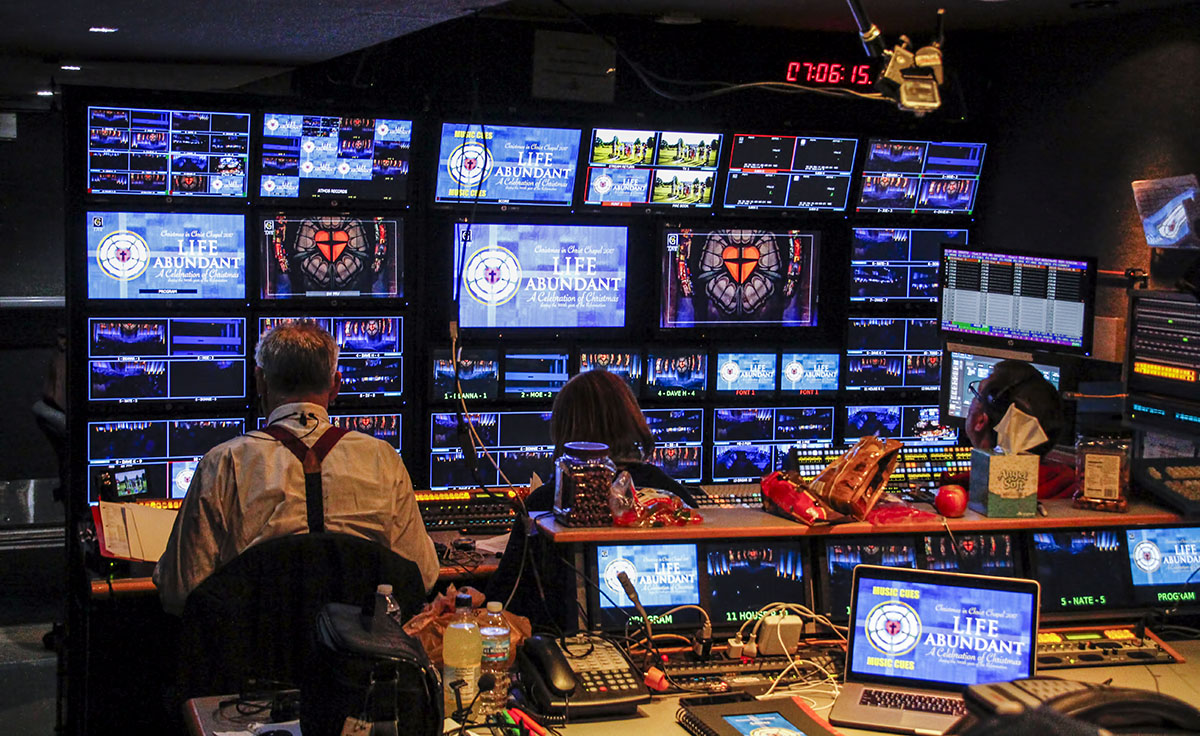 In those days, it was a more straightforward affair, purely a music-infused worship service. There were no risers for the choir who stood instead on the chancel steps. There was no special lighting, no supplemental audio, or other production elements. Prelude and postlude music featured brass instruments that were used not only for the music but also for the “sparkle” they provided.

C in CC has grown to a five-performance event and continues to sell out year after year. And, thanks to live streaming technology (and the talented folks on the Heroic team), the concert reaches people who aren’t within driving distance or even on the same continent. While just 5500 people can attend the five live events, many thousands more can be there in spirit via live stream.

Jon Young says adding the webcast has been transformational because it gives the same energy as though you were there. It is a highly emotional experience, as both a concert and a worship service.

But let’s back up a minute. 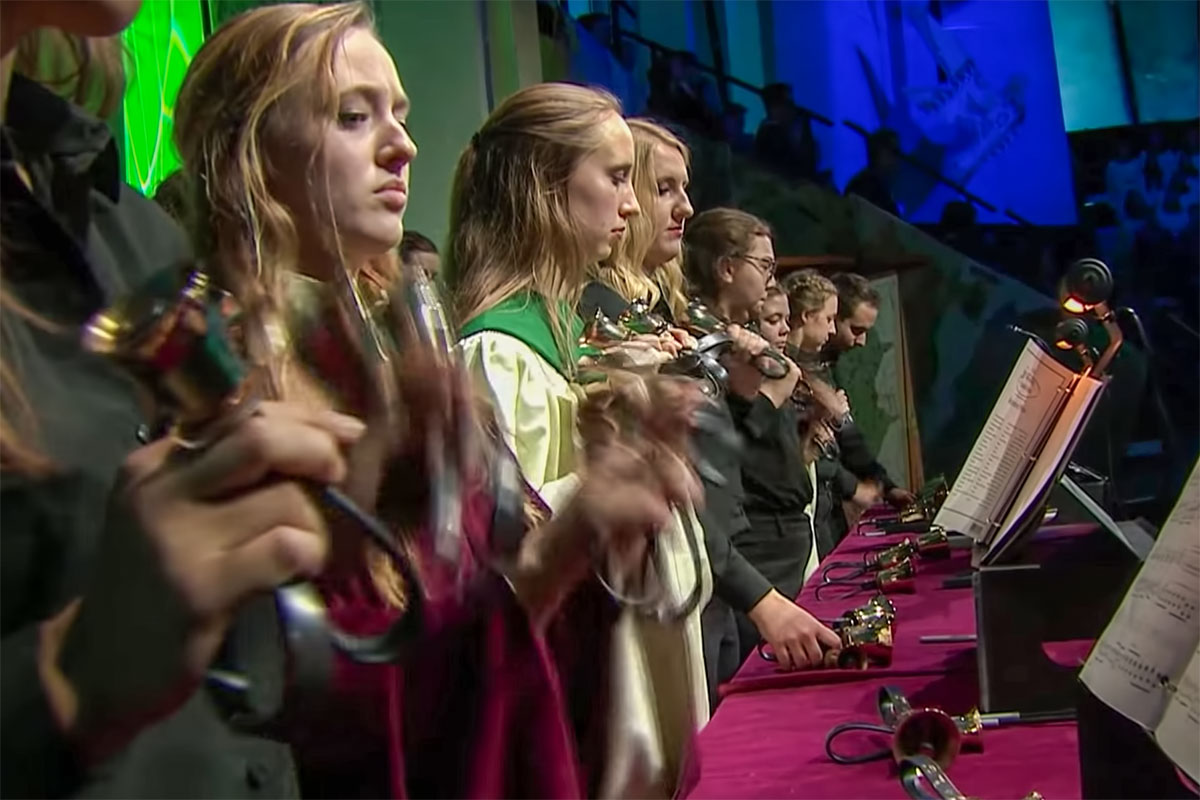 Every year the college ponders potential Christmas in Christ Chapel themes and titles, then picks one that reflects the celebration of the Nativity but through a new lens. For 2019, the theme is “Love Beyond Borders.” Gustavus describes the performance as “following the incarnation story in the gospel of Matthew, connecting us to God’s abundant and generous border-crossing love and inspires us to transcend borders that keep us divided from one another and God’s reign of justice and compassion in our world.”

Past concert titles have included:

Enhancing the Performance to Give It Even Deeper Meaning

Ten years ago, as part of the evolution of C in CC, the college decided to add some “effects” to the production and approached Jon and Heroic Productions about renting some theater lighting. From there, Heroic’s involvement continued to grow. In 2014, Jon suggested producing a live, multi-camera webstream broadcast of one of the performances, providing a front-row seat to viewers and alumni all over the world. Jon, Anita, and Heroic Productions were so convinced that creating this broadcast would offer multiple benefits. Both to the college and its music program that they underwrote the cost of this first live stream. By all measures, it was a resounding success resulting in its first Hermes Creative Award, followed by two more, as well as a Telly Award for Heroic.

During the last three years, Twin Cities Public TV (TPT) has partnered with Gustavus to create one-hour edited versions of the CinCC performances using Heroic’s raw recorded isolated camera footage. These programs have been broadcast locally, as well as in numerous other public TV markets around the country during the Christmas season.

Not a TV Show…

“This is not a TV show with a live audience,” Jon cautions, “it is a worship service that we broadcast.” So it brings all the usual challenges of setting up and shooting any live event, and more. Heroics’ set-up and crew must be as unobtrusive as possible, despite the fact that they are managing 12 cameras, a 24-foot jib, and an ENG (electronic news gathering) rover to capture video and sound from multiple angles. 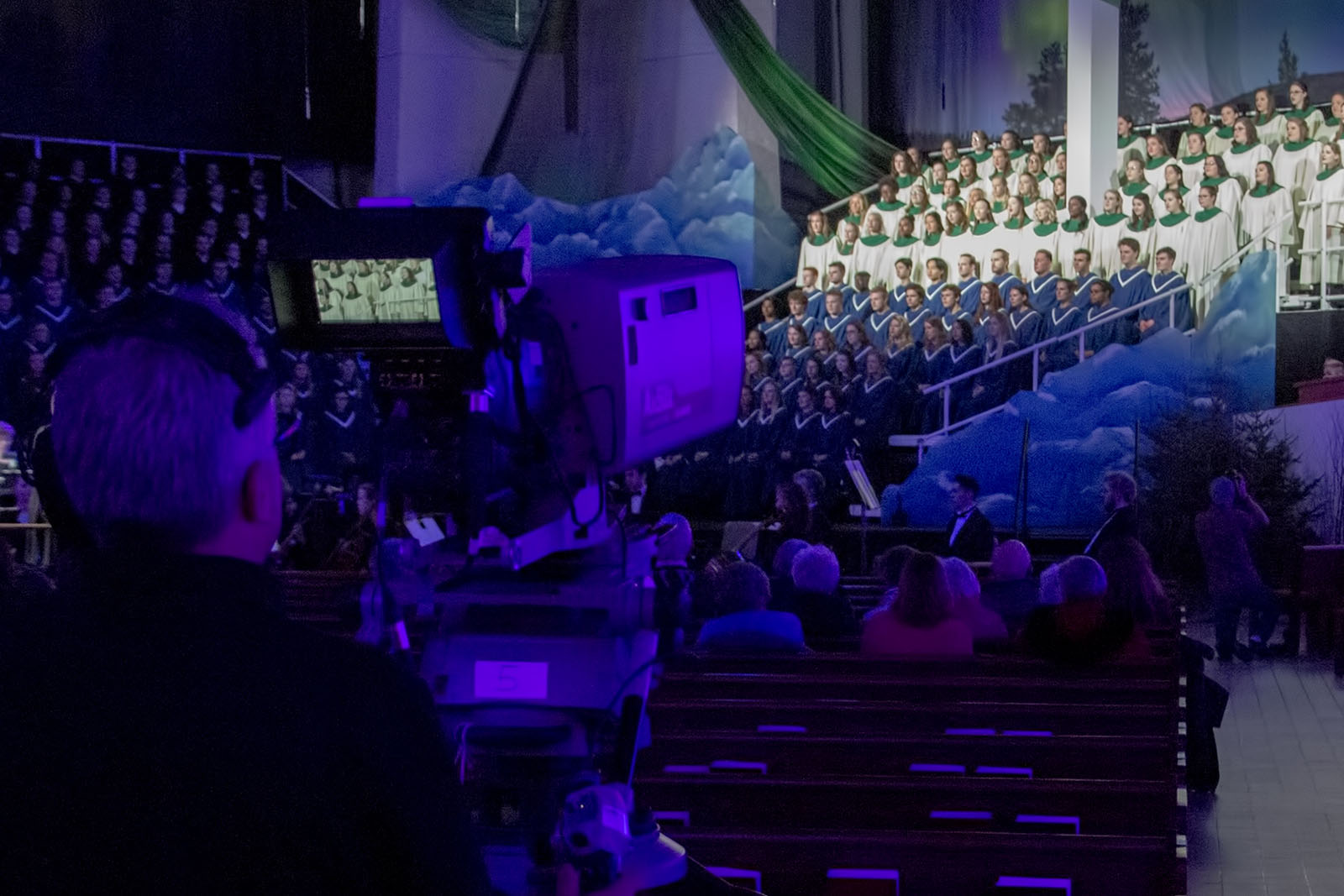 Heroic Productions is on hand Thursday, Friday, and Saturday nights, with a camera-free Sunday service. “From a pure production standpoint, we treat Thursday and Friday as rehearsals for the Saturday live webcast,” Jon says. After five years, the Heroic crew knows what works best for both performers and the audience. And the result? “On Saturday night, it is electric – the students know they are on TV but it’s not disruptive, it’s fun.”

Saturday night’s performance is also made available to the GACAC (Gustavus Adolphus College Association of Congregations). It is Gustavus’s “Merry Christmas” gift intended to give back to all 140 churches that make up the association.

This will be the fifth year for live streaming. So, now, anyone looking to attend a Christmas performance in the Twin Cities can choose to join the Gustavus community for C in CC. Adding the webcast has also benefited participants and the college itself in so many ways:

The Joy of Participating

Considering that C in CC is a beloved, time-honored annual tradition, you might think Gustavus is a music school. It is not. However, it is distinctive in that there aren’t a lot of colleges with good music programs for non-majors.

Aleah Felton has been singing since she was a little girl, in choirs since middle school. She chose to attend Gustavus because, in her words, “the moment I stepped on campus I knew it was the right choice.” Aleah had attended a couple of Christmas in Christ Chapel events when her brother was a student. She didn’t quite understand the concert’s full impact then, seeing the seniors holding hands and in tears at the end. But knew she wanted to be part of it. Her major? Secondary education.

Gustavus is a singing community year-round, but this is Aleah’s favorite time of year because all the orchestras and choirs on campus come together to perform communal pieces. She’s a senior now, so this December will mark her fourth and final appearance in the concert. “It’s really magical because there are so many people involved,” she says, “choirs, the orchestra, the congregation even chimes in on worship hymns.” Parents, relatives, faculty, staff, and people from the community are all part of the experience, too.

Will Ristow is also a senior. Like Aleah, he has been singing since he was younger. Also, like her, this year’s concert will be his “last hurrah.” Will was president of his choir in high school and chose to attend Gustavus specifically because of the school’s strong music tradition. His major? Not music. Actually, he has two – geography and political science – plus a minor in peace studies.

Will says the first year he sang in C in CC, as a freshman, reaffirmed how important music is in his everyday life. “You come to appreciate that this is so much more than just another concert,” he says. “It is the opportunity to share our talents and all the work that goes into production with others. The music, the joy, the respect within and among the choirs. We have to stop to remember that Christmas in Christ Chapel is now shared widely across the globe.”

The Joy of Returning, Year after Year

Aleah Felton describes C in CC as an “everlasting” event. Next December, she and Will Ristow will join Anita and Jon Young and thousands of fellow alumni, family members, friends, and music lovers worldwide in celebrating Christmas in Christ Chapel.

Will plans to join the Foreign Service, so chances are good he won’t be in Minneapolis for future performances. He’ll miss being part of the event, he acknowledges, but he won’t miss out entirely. He can participate via live stream no matter where he is, thanks to a couple of very generous alumni and modern technology.

Tears of Joy, One More Time

This year, though, they will both be in place for their final C in CC performance. Holding hands with the other seniors and singing through tears of joy as the entire community comes together for O Come All Ye Faithful. The hymn that has traditionally concluded the C in CC service. You can join them this year on December 7th, no matter where you are, thanks to a small college with a tremendous music program.

Corporate Event Audience Engagement: How will your organization win its audience?

Select the Right Corporate Event Partner to Elevate Your Brand