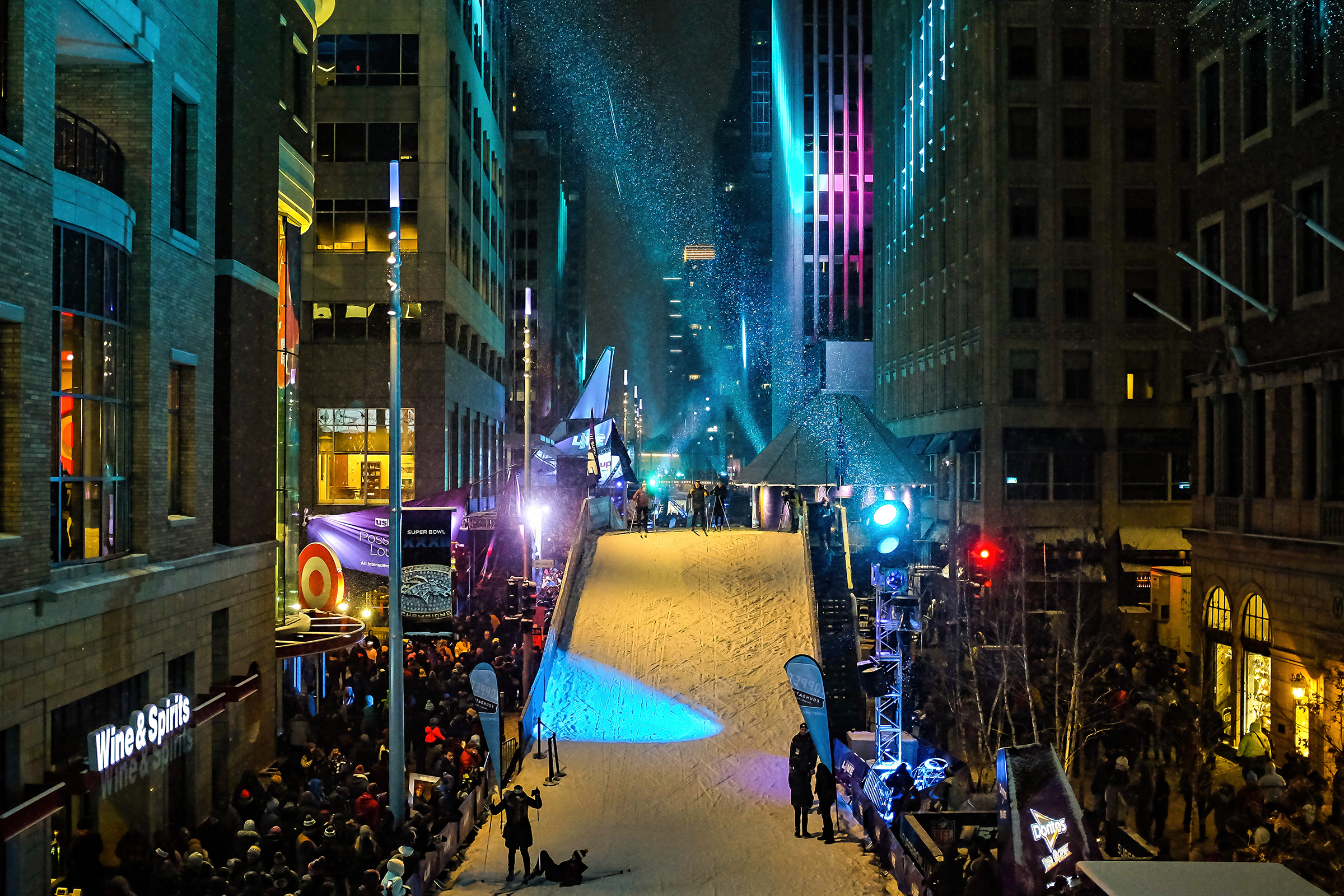 The opportunity to work on Super Bowl LIVE festivities doesn’t happen very often for Minnesota vendors. In fact, the last time we hosted The Big Game was in 1992, when the Washington Redskins defeated the Buffalo Bills 37–24 at Hubert H. Humphrey Metrodome. When The Big Game came to U.S. Bank Stadium last year, we were honored to have a seat at the table by being chosen as the lighting provider for all of Super Bowl LIVE 2018.

Super Bowl LIVE was hands-down the largest event we’ve participated in to date, and it challenged us in ways we’ve never experienced before. We learned a number of great lessons from our AV experience at Super Bowl LIVE that we wanted to share with others in the event production world. Before we jump into the lessons we learned, it’s important that we lay out the details of this large-scale event.

Super Bowl LIVE 2018 was a 10-day outdoor festival celebrating everything Minnesota and football. The event spanned six blocks of Nicollet Mall in the heart of downtown Minneapolis and involved dozens of local and national vendors, as well as 10 evenings of local and national music acts on the outdoor Verizon Up stage.

Everything about the phrase “Minnesota winter” held true during those 2-plus weeks which encompassed load-in, show run, and tear-down. Although set-up began with a “balmy,” above-average 47 degrees, by the Sunday of The Big Game temperatures had plunged to 1 degree above zero.

Needless to say, it was cold and far from ideal for electrical equipment and intelligent moving lights. Despite the frigid temps, sometimes severe wind-chills and several instances of plowable snow, more than one million people attended Super Bowl LIVE events over the course of the festivities. Now that we’ve laid that groundwork, here are some lessons we learned and observations we made.

This seems like a pretty obvious point. But, if you’re hosting an event with scores of vendors, it can be difficult to ensure everyone is on the same page. For example, communication channels with the City of Minneapolis were understandably bogged down by a multitude of security, logistic and vendor considerations, which, as an outcome, made it difficult for each vendor to establish an ideal and efficient load-in time.

Challenges in communication may not only affect one minor aspect of your event but can also snowball into other areas if you’re not careful. We think it’s best to name someone as the lead contact for all vendors. That way everyone receives the same information and knows who to report to with questions or concerns.

Organization may be just as important as communication when it comes to planning and hosting a large-scale event. Of course, one part of being well-organized is identifying a lead contact, which we already mentioned. But it’s also important to be organized in every element of your event whether it’s coordinating vendors, scheduling rehearsals for your guest speakers, or training event staff.

It was our advanced logistics planning and organization for Super Bowl LIVE that made our gear set-up and strike as successful and efficient as it was. The large physical area of the event and the huge number of vendors also competing for load-in and load-out space meant being prepared to drop off or pick up equipment at virtually every corner of this six-block event.

In anticipation of that, we individually labeled all 4,000 pieces of gear and cases along with their location on-site, making inventory tracking as easy as it could possibly be for an event of this size.

This is a given. Any time you host an event, something will happen that you didn’t expect. Sure, it could be something minuscule and unimportant to the success of your event, but other times, it could be something big. Our best advice to you is to expect the unexpected. We know that won’t make you feel great, but it’s better than expecting everything to run perfectly and being thrown for a loop when it doesn’t. A perfect example of this from our Super Bowl LIVE experience included power sourcing.

Initially, all the power distribution for the event was supposed to have been provided by a single, dedicated vendor, but they ultimately didn’t have enough equipment to support the entire show. That fact wasn’t made known to us until just a couple of weeks before the event was to start, so we were left scrambling to find equipment. This presented a huge challenge because much of that type of equipment in the Midwest as well as from around the country had already been sent to support Super Bowl LIVE as well as The Big Game.

“Finding a last-minute replacement source was probably our riskiest piece of the whole event and something we couldn’t have planned for,” says Steve Brown, production account manager at Heroic Productions. We stepped up and found a vendor willing to build several power distribution boxes for us on a very short deadline.

Finding individuals to help with load-in and strike is crucial for any large-scale event. For an event as large as Super Bowl LIVE, it was imperative that we have qualified people to ensure our processes went as efficiently as possible.

We ran into a challenge when we suddenly found out the day before load-in that only 2 of the 20 qualified people we’d requested through the official Super Bowl LIVE staffing office were available to help. Again, this was something we didn’t expect. “There just weren’t enough people in the metro,” says Mike Rice, production manager at Heroic Productions. So, with the blessing of the staffing office, we wound up using our own pool of qualified talent and the load-in process actually went quite smoothly.

This goes hand-in-hand with expecting the unexpected. When an issue arises, you’ll need to think creatively to find a solution and adapt your plan accordingly. The more flexible you are with change and the more creatively you think, the better your chances are of hosting a successful event.

We experienced this firsthand when we sourced our own power gear and filled openings for load-in. Though we didn’t expect either situation, we used our creativity and experience to resolve the issue and adapted our plan in order to be successful.

Patience is Truly a Virtue

We know your parents told you this as a kid, but patience truly is a virtue, especially when it comes to planning a large-scale event. There are a million tasks to complete before the big day and a lot of people to coordinate when the day arrives. Since you already know you’ll inevitably come across some roadblocks, it’s important to stay calm, cool and collected.

Super Bowl LIVE was an extraordinary experience. We were honored to be a part of, but it tested our patience in a number of ways. “In a situation like this, because there were so many partners, all with their own time-frames and needs, we worked hard to be accommodating,” remarked Miles Kipper, operations manager at Heroic Productions.

OK. So, this isn’t the most valuable lesson we learned, but it is one to remember if you’re planning an outdoor event during the colder months. Believe it or not, some people still underestimate the power of a thick pair of gloves and winter parka when it comes to subfreezing temperatures. Our very own Dustin underestimated and made the mistake of wearing a thin pair of gloves and improper footwear during one of the load in days. Let’s just say, Miles had to bring him some appropriate winter attire. Our advice? Dress for the weather! You’re going to be outside most of the day, so it’s best to be warm and functional.

Despite all of the challenges it presented, we’re happy to add Super Bowl LIVE Production Partner to our portfolio. We learned a number of valuable lessons during the 10-day event and hope learning a bit about our experience helps prepare you for a successful event in the near future.

Corporate Event Audience Engagement: How will your organization win its audience?

Select the Right Corporate Event Partner to Elevate Your Brand